Busy, busy but I got to shop! 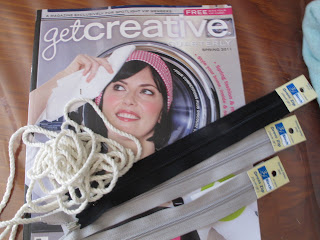 As usual, I was undecided about where to go today since I am two kids down on Thurs - Fri.
I was feeling rather tense and had been searching for new clothing patterns online so along with feeling crap I had an itch for something, anything crafty!!! I also had to return library books and had lots of laundry packing to catch up on. This morning after preschool drop off I realised that Miss 5's school hat needed to be dropped off so that was done and I felt like a good mum : ) She saw me along with all her classmates and she looked happy so I was happy. Which was far from what I was feeling yesterday and the day before.


So after drop off I headed straight to Spotlight. I was in the lift thinking this place could be so awesome if they chucked in Coles or Woolies. If only, in my dreams. 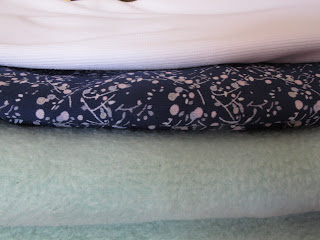 Moving on, with two kids in the pram I collected a few things I needed; dress zips, piping cord, a free magazine, woo hoo. Heaven. I could feel the stress leaving me. I felt relaxed.
I bought these three fabrics: mint coloured polar fleece for a baby blanket, a navy print for a dress and white ribbing. That was all for now as the baby started and was hungry and I had no food with me. If you're a parent you know this is an error that you will pay for. But it was ok, i plonked him on the cutting counter and he stopped fussing but went after the scissors : p 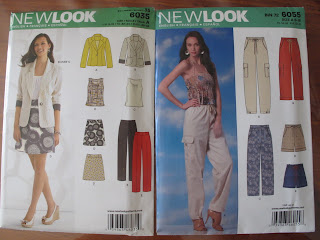 I perused the New Look book and found a few patterns I thought could be good. Turns out they didn't have one I was after and another one I decided not to get. These two looked pretty good though. New Look 6035 had a simple skirt pattern and top pattern which I would get alot out of. New Look 6055 had the shorts pattern I kinda liked (but it has an elasticated waist) and the long version is rather in right now. Since they were half price I am looking at $5 each. Excellent, done. 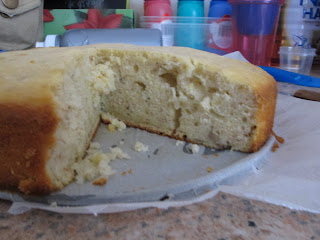 ﻿If you have a packet of butter cake mix and a few ripe bananas just mix them togetherand voila, yummy banana cake. Perfect for her lunch box and I have to say there's no leftovers.

I just checked my e-mail and Spotlight have sent a $10 voucher. I could have used that today, urghhh.
Hmmm, what do I have planned for tomorrow?