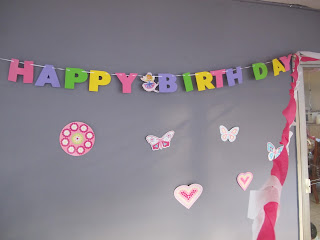 Over the weekend we celebrated Little Miss finally turning 6 and Father's Day.
I had been planning this party for one whole month as it was the first party we've had at home. I was so happy but a bit nervous when the day arrived and kept thinking I was forgetting something on the day (it was the corn cobs!). But everything went to plan and I was so happy for her and all who attended. 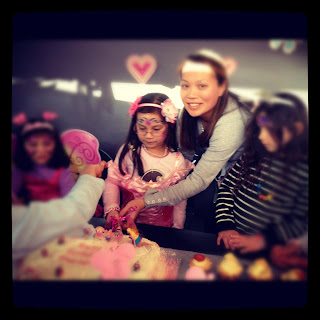 Here I am with a cheesy smile as we were cutting her cake. It was a home-made one made by her aunt and we had frosted it and decorated it on the day (a bit stressful but fun). Come 1pm, when the party was starting, I was worried that no-one would turn up. I mean, I could hear the birds and apart from my sister's family being there, she only had 1 friend from school turn up. I asked her during the two weeks prior "Are you sure you don't want to invite anyone else?" I had only got two rsvp's and was rather disappointed. Is this how mother's are suppose to feel? I felt sad for her but our other friends turned up and little cousins so eventually by 1.30pm we had a house full of little kids being entertained by the Fairy and I was relieved. Really, really, relieved. 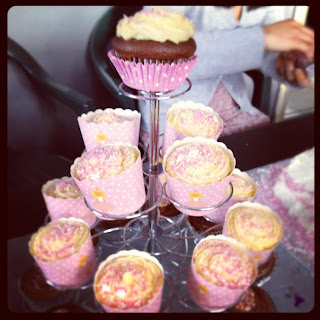 I borrowed this cupcake stand and I found the cutest princess cupcake patty pans from the cheap store ($2.95 for a pack of 25). They were food grade so I could cook directly into them and came out really lovely. The fairy sprinkles really added that special flair to them. I made the cupcakes from scratch that morning (I had burned the choc ones the night before). I was told they tasted delicious though the day after they were a bit dense. 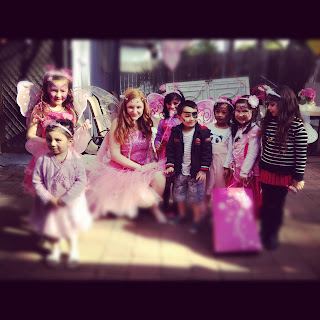 Here's the gang of little kids with the Fairy Mary. I had booked Fairy Good Times and she did a fantastic job with the kids. They all loved the show she put on. Even the boys were really involved. The kids laughed, recieved gifts and had their faces painted. 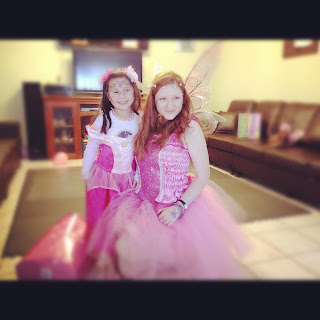 This was taken just before the fairy left and all the kids went outside. I was glad the kids had the lounge as it was a bit windy outside so the mothers sat in comfort with their little kids and watched the show. Although it was a little pricey I am so glad we had the fairy for her. 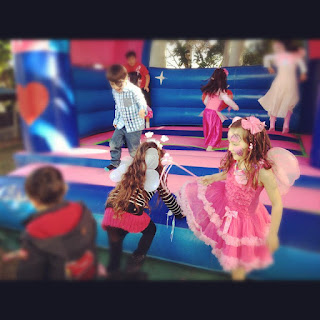 We also got a jumping castle which arrived just on time. They had a few hold-ups with other customers and the castle is still at my house waiting to be picked-up. I loved it and the kids had fun on it too. It was a big Barbie one from Jumping Rascals. 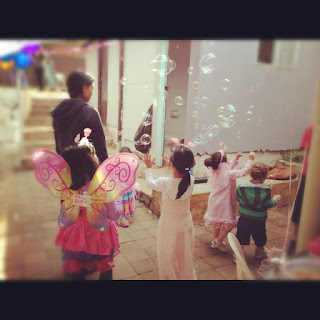 My sister put on the bubble machine and you know it's always a huge hit. Something about bubbles draws the kids to them. They can play for ages trying to bust them. A good bubble machine is all you need for the smaller babies and toddlers. 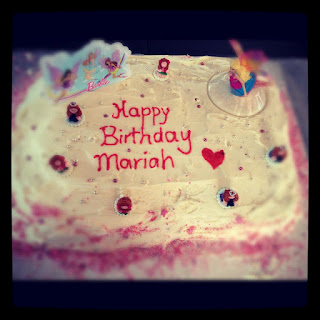 Here's the cake. I wrote the message on it with decorator gel. It is hard to write but I think it turned out nice. I wanted to buy some store cake and decorate it myself but my sis in law wanted to make one for her and I didn't want to argue with her so she went ahead and stressed herself out while making it and trying to get it frosted in time. I think it looks great. I ordered the Barbie fairy from e-bay and the pink sprinkles, little fairies and cachous from Coles. 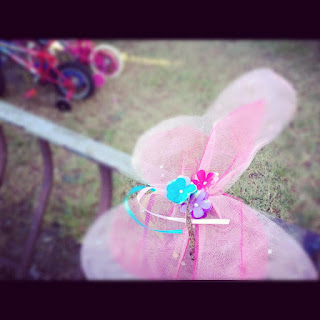 My sister's put up butterfly wings around the place. My father-in-law (bless him) put up the streamers which made it look more festive. These were all last minute things but could have been done much earlier to save time. 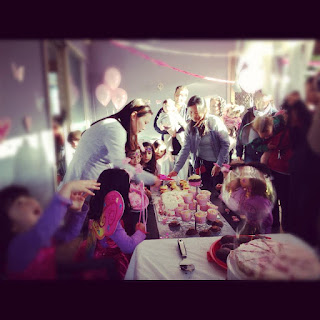 This is the dessert stage where I was cutting cake and people were still pretty full from lunch! Haa haa. I didn't bring out tea and coffee but I'm sure not many adults would have wanted any and with kids around you don't want hot water just laying around waiting to be tipped over. 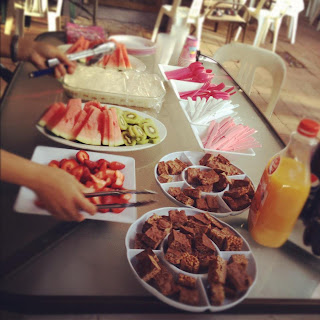 I made Mars Bar slice (pictured) and we cut up fruit onto serving plates. Looks delicious and healthy! I also made tiramisu which was made the day before to save heaps of time. We were really pooped by the end of the day but I loved every second of it. We're just not having another home party any time soon!!!