If you were like me, Book Week comes around when you don't expect it. I mean, once you see other school kids walking to school in their costumes you start wondering if you're going to get that letter about it in the school bag. We somehow recieve our letters with little notice or it's just that I really would like, say, a month in advance notice! Because, every single shop gets sold out of costumes very quickly and there are no sizes to be found for said Miss Almost 8. She wanted me to buy something for her and she wanted to be Little Red Riding Hood in particular.


As luck and persistence (from said child) would have it, I recall having a pattern for a cape. It even happened so that it was called Red Riding Hood in Oliver and Ss' book - Little Things to Sew by Liesl Gibson. I was actually just thinking I would cut out a circle from some fabric and copy a hood pattern from another pattern but somehow roped myself into tracing out this pattern and also actually cutting the lining for this as well. We bought this red polar fleece throw from Kmart for $5 and I hoped it would just be enough as there was only one other red throw left in the shop. 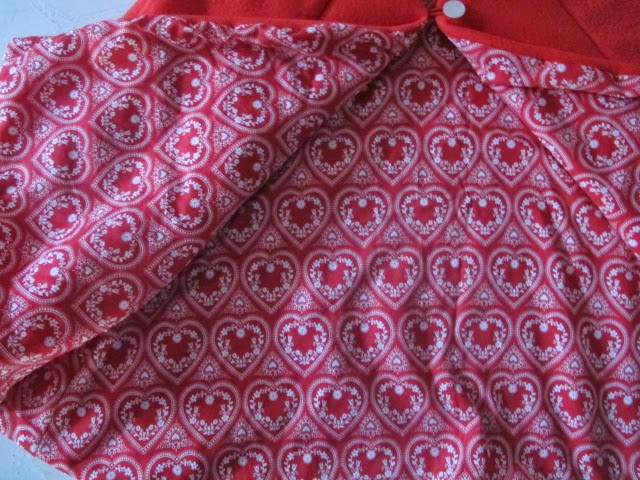 So after all the kids were in bed I started sewing. I was stuck at the first instruction; to stay stitch the arm opening. No pictures. I had no clue if I was meant to fold it down or not so I left that part and moved on. As I sewed up the outer panels I realised I had one piece missing. Oh great! Did I even have enough fleece left to eek out that panel? Yes, of course I did. Divine intervention, it seems, to have kept me going because it was well after 10pm and I wasn't really understanding the instructions as the pictures were not so clear and I need pictures!!! Also, when you fold the fabric to cut out your two pieces I wondered if I would get the correct cut... by midnight all this fussing was left aside as I sewed, on and on and on. There was no going back and no going forward if anything else went wrong. I did run out of red thread but realised quickly that you won't be able to see it anyway. I had used red thread for the hood to top stitch and that was fine. I used black thread inside and you don't see it when you turn the lining inside out anyway. 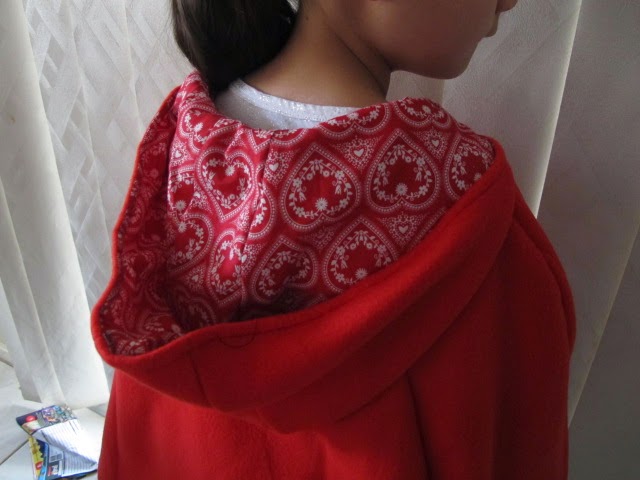 It was certainly looking pretty good and going really well. It helps to have something playing on the laptop to keep me company. I used a red elastic hair tie to make the button loop and used one white button on the front. I finished this cape at 1am. Bleary-eyed I went to bed. In the morning I showed it to her. She really likes it and I was so glad how good it looked when she put it on. It's been really cold so I told her to wear jeans and a shirt instead of a dress like she wanted the night before. I'm glad I went ahead with the lining too. It was some fabric I bought on sale at Spotlight that I wanted to make a dress out of for her. It's a really pretty love heart print cotton that's quite soft. The lining was a bit shorter than the polar fleece on the front panels so I pulled it down a bit and then cut off the extra bits before turning it through the hand opening (no pockets). Turns out  this thing is also reversible!! She is yet to wear it reversed but wore it the next day to the church family fun day. I really love it and would recommend the pattern to anyone who wants a little cape for their girl. What do you think of it?