October 14, 2015
It seems to be that time again when some appliance of mine has broken down. At the beginning of the year it was my vacumn cleaner. It didn't really break down but we somehow lost the filter funnel in the barrell). This time around it's the iron (which it feels like I have only just purchased). I was doing a batch of school uniform ironing, turned it off and then tried to come back to it only to find that it was auto-shutting off and not heating up. So I found a scanned copy of my receipt and it was over a year ago when I bought it from Target. Hubby said to just get another one (this coming from a guy who wants to keep everything in case he can fix it!) I talked to my friends at work and we checked some models online. My friend said to go for Braun or Tefal and my other guy said don't buy Phillips. My last one (pictured left in the photo above) was the Tefal Azur GC4865. I wasn't really impressed when I took it home and I have accidentally seen it go sliding off the ironing board once but it continued to work pretty well up until now. So I dashed to David Jones and bought the new Braun TexStyle 7 TS745a iron and hoped it would be all that I read about. 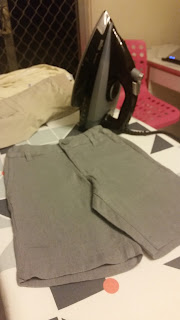 It certainly impressed me the moment I started ironing the clothes. One pass over shirts was enough for creases to be gone and a few passes over linen made it a breeze to use. I then compared it side by side with my Tefal and it's sole plate is wider. I plonked them on my small scale and there was a 100gm difference. The Tefal being heavier at 1404gms and Braun at 1303gms. Gees I was happy about that. My old Tefal was pretty heavy and I needed to keep refilling the water tank many times. The Braun has a 400ml tank which I still need to refill but I love that it's also bigger. 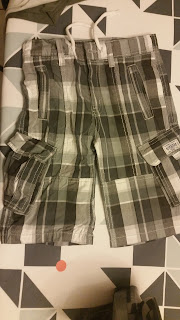 Wrinkly shorts example. I've ironed on the right hand side and it's nice and flat. Sorry about the night pics. Ironing does not wait for anyone! Haa haa. 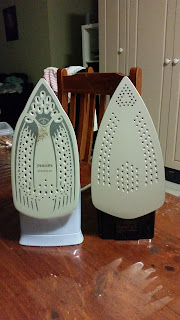 The Tefal Azur GC4685 is slimmer but heavier. The Braun ts745a is wider but lighter. Yay. The Eloxyl soleplate is scratch resistant. 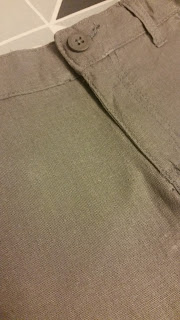 My son's linen shorts which were a pain to iron but now ironing shorts has never been easier. It did well over the cargo shorts and denim jeans too. 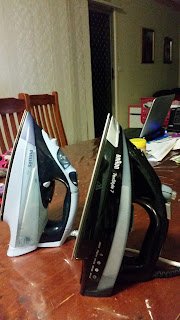 So there you have it. I recommend the Braun ts745a to everyone who wants a great iron. It's pricier but so worth it. I got it on sale at DJ's for $118. (rrp $139) You do get what you pay for. If you have a problem with it just return it to the store you purchased it from. I think the blue and white one in this style was pricier but it had some bad review maybe? on it and it felt heavier so I opted for the black one.

* I was not paid in any way. These opinions are purely and solely my own*