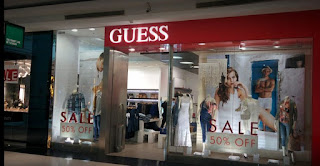 I feel the need to share with you lessons learned during my end of year shopping season. As with the coming of Christmas we all can get caught up in the frenzy of shopping like mad and buying all sorts of things. Some things we will keep and other things we buy them and think to ourselves that "oh I'll just return it if it doesn't fit.'


Well, a big caveat emptor - let the buyer beware! (I learned this phrase in high school Commerce)
you may have a big surprise when there's a hiccup on a return. So I bought a shirt from Guess on boxing day thinking I could return it if it didn't fit my hubby. I checked the terms and conditions of the website and it meant that I had to return it within 7 days, as it was a sale item. So, off I went with my receipt three days later to the store. It wasn't an issue. I put in my pin for the same credit card I used and when she asked if I wanted the receipt, I said no because we were in a rush and I could see the paper ran out on the device. I had a niggly feeling after I left but anyway I checked my bank app a few days later and could see the charge on my card but not as a credit. My heart skipped a beat and my hubby said, just give it a few days as it was a different bank. I could not sleep that night and I actually was in tears in bed wondering why I did not just get the receipt.

Anyway, a week later it was still the same.We confirmed with the bank that it was indeed a charge not a credit. So now we were stuck with being billed twice for an item we do not own.
I went to the store today and spoke to a lady there. She checked the till that was used for the transaction and I was praying to God to help. She had to go and talk to someone I think as she said she would be back and then when she came back she said she could refund me both amounts to which I was incredibly relieved and thankful. She gave me my receipt which showed the refund.

So the lesson learned is to KEEP THE BLOODY RECEIPT if they ask you if you want a copy. Yes, print the darn copy and take a photo of it. Don't worry about the trees. Read the return terms and conditions. Thank yourself later for having done so. 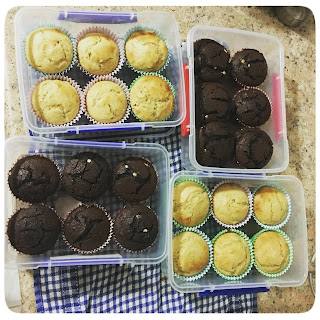 The other night I decided to make some muffins so they kids would have snacks to eat at home. The light ones are banana (my kids actually don't eat them much) and the others are White Wings Triple Choc. I even found enough containers for them and I felt like taking a snap for properity! 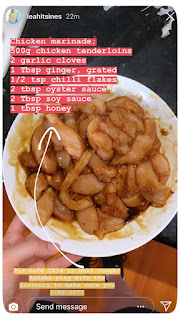 On a food note, I am in love with all things teriyaki. Especially salmon. I found this on my Instagram stories from Leah Itsines. I saved it but realised most of the stir fries I use the same ingredients minus the honey. Otherwise I get the Masterfoods Teriyaki marinade. 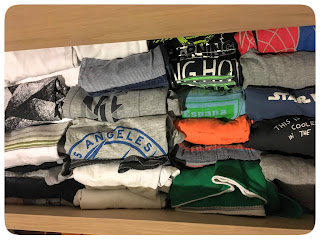 Life changing change that happened during the holidays, I folded my clothes and the kids clothes. We watched the new tv show on Netflix by Marie Kondo. She's a Japanese consultant who specialises in tidying up. She has a method of folding called KonMari and when I re-folded my shirts I was amazed at how much space I had left over! We then did my eldest daughter's drawers and the boys tall boy. It was truly life changing, well for me anyway. I've told my friend at work about it and she's getting onto it too. There's heaps of Youtube videos for you to check out.

She also talks about only keeping items that spark joy. She's right. I keep so many old outdated clothes in my closet and only wear them a handful of times. I have started to declutter and this year I aim to live a lot more less cluttered.

I just wish the rest of house-hold cleaning was just as easy. Do you also struggle with this?