Back to School/Work Life

Hello everyone. We're back in full swing both at school and work. It certainly feels a little strange to me but I'm finding my rhythm for this year. Did I mention that the kids are taking the school bus? Prob not but yeah, I walk them up to the bus stop and then I'm literally on my bike on the way to work.


It takes me like 12mins to get to work and it's great.  The school bus is pretty much the same. This morning I was sweating a lot and so I had my big towel with me and I had a shower. It felt really good. Since the weather is still warm I sweat on the way home too. There's a big hill and my heart rate reaches about 155bpm as I'm off my seat. The rest is down and hilly. So much harder than my old route by the riverside, which I miss.


I met up with an old colleague and we went to a sushi restaurant. I had this sesame salmon bowl for lunch. Oh my it's sooooo good! I could have it every day. If you're ever in Parramatta, try Alpha Sushi. It's a small place on Philip St but food is great. I must take the kids. They would love it.

My friend went to Costco and got me a box of Ghirardelli brownie mixes. Oh my gosh, yum!!! I made them for a birthday. They were a bit overdone on the edges because I failed to start my timer (d'oh!) but quite fudgy on the inside. This was 3 packets which is roughly 72 slices or something. Next smaller batch was one bag and made 16 fattish brownies. I made them fudgier and kept an eye on the timer. 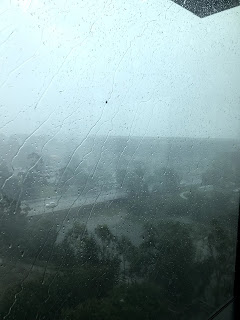 Speaking of summer, we also have wet weather due to how humid it gets. So, naturally we get pelted with rain for a day. You know it actually cleared up 20minutes after this onslaught, as if nothing ever happened. How very peculiar.

Hope you are all going well. Me, I've not enough time to relax so I try to make some time for some self-care. That's a word we don't use often.

Look after yourself, because it could be too late by the time you realise you need it. I'm saying this because a colleague had a minor heart attack over the weekend by everyon's surprise and shock. He was really fit and was in good shape. Or so it seemed. Well, he's had to have some surgery (I'm guessing to remove a blockage) and he'll be on rest for a few weeks before he returns.

So my friends, see the doctor and get yourself checked out.

It's the season of Lent so I'm trying to do extra works of charity and take some time to do the things that Jesus wants us to do. Be more kind, stop saying negative and hurtful things. No more gossiping etc. Going to mass an extra day of the week. Going to confession again. Praying for those who are sick.

I hope you can do the same.