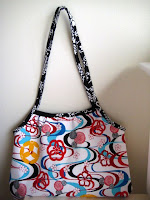 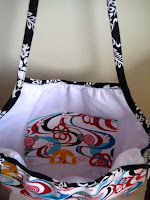 Here is my finished bag from the ever omnipotent Japanese book.

Okay, so I had some trouble with the bias. Firstly, I made the bias myself. This was a task in itself. I'd sit and stare at the graphs for a day calculating how big to make my square, how many inches of bias it would make, how big did I want my bias to be? I had no idea! It was my first time and truthfully, it wasn't as fun as just going out to buy some but it was more satisfying and it did look sooo much better... don't you think.

I sat in bed last night pinning in the Pellon Craft Fuse (stabiliser) to the handles as I wanted it to be sturdier. I am not sure if I regret using it on the body of the bag as I did have some bubbles and it doesn't drape as nicely with the gathering buuuut ... it will do and as it's my first bag I can get away with it.

I will be making more of these as I really love the design but I won't be using the craft fuse next time. It was so simple and I will make a smaller version for my sister who turns 31 on the 15th.
Oooh I better get cracking cos as you know it takes me a few weeks to get anything done around here.